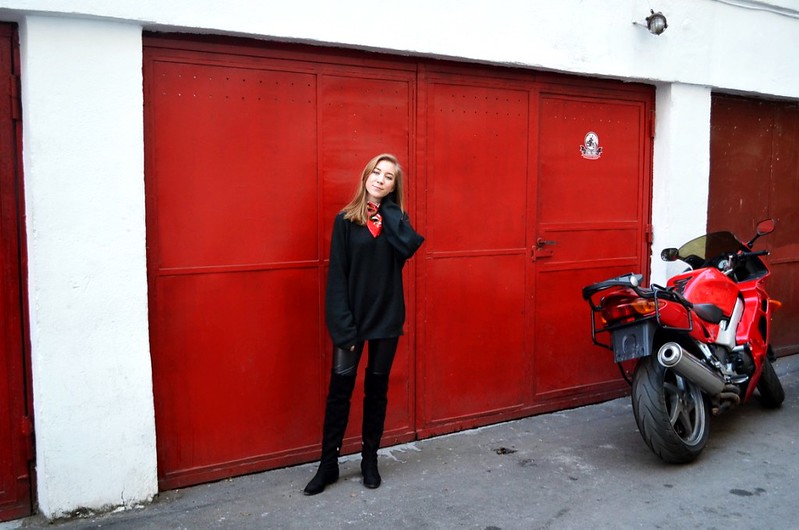 It was around this time last year that I got a pair of over the knee boots from Zara. I bought these influenced by many things, but mostly because I believed they were the key to looking effortlessly chic at all times (and I couldn’t afford the hefty price of StuartWeitzman boots).

Since then, I have worn them tirelessly and one year later, I still love them just as much as I did when I first tried them on. OTK* boots can look like they are a daring shoe to wear, or that they are too pretentious but quite contrary, I think there’s a timeless quality to them. By now, everyone owns some version of an over the knee boot and I see people walking down the street in them every day. However, whilst the popularisation of chokers has made me give up on those completely, the over the knee boot is still very much a staple in my wardrobe. I even remember that when I was young, my mother owned a pair of kitten heeled over the knee boots that I always tried to steal although they didn’t fit me properly. I’ve mentioned this previously when I showed you how I wore a slip dress for 5 days in a row, but I think my mother totally predicted this trend too, because to this day, the OTK boot bears the same elegance and grace to me.

They look great, right? You almost want to buy a pair too. Judging by the 263 words I’ve written so far, I fully support that decision. By all means, here (and here and here) are some suggestions.

Before you go ahead and click ‘buy now’ though, bear in mind that there are warnings that come with wearing these boots. Over the knee boots will look great, but

2.     For the first few weeks, you won’t be able to properly bend your knees in them.

3. You might even have trouble going up the stairs in the boots’ infancy days.

Case in point: they are amazing but bloody constricting. You won’t be able to wear these running and you most likely won’t want to cross your legs in them either. So reserve them for instances when you are going to stand straight, like waiting in line to go into the LEGO store in London. As long as you take these three things into consideration, over the knee boots are GREAT.

The best thing is that if they had to be anything else but an amazing pair of shoes, the over the knee boots would be versatile. My personal favourite option is wearing the boots with just a pair of blue jeans and a simple sweater and blazer combo. JACKPOT. I went with something even more casual this time, to show you that although they have their own acronym, OTK boots don’t have to be pretentious.

Now tell me, what do you think? Do you wear over the knee boots? Are you going to buy a pair now?
Labels: asos blogger miss selfridge route 13 streetstyle stuart weitzman zara