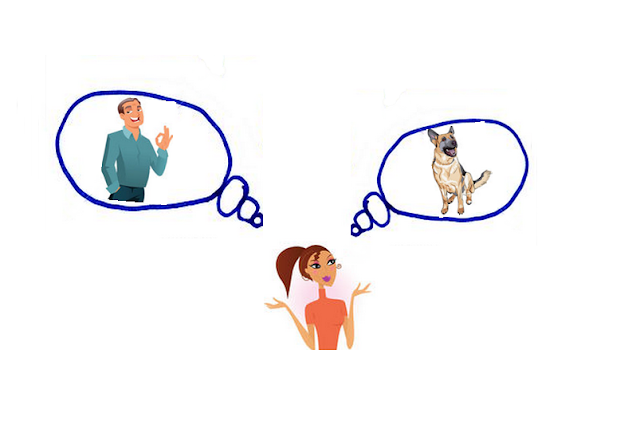 What do you want for Christmas this year: a boyfriend or a dog? If you’re in doubt, don’t worry – it’s basically the same thing!

I believe one of the most important things people crave is familiarity. Let’s just cut the ‘I’m 20 and all I need is adventure’ crap because, at the end of the day, when all adventure is over all we want is to be in our warm bed near our families and friends. We all like to read our favourite book twice and go to places we loved when we were little even if we only loved them because we were little. Hell, I even watched Magic Mike because of Matt Bomer and Channing Tatum. "With familiarity, other people become part of ourselves", said James Coan, a psychology professor in University of Virginia's College of Arts & Sciences. We even choose to buy dogs that look like us. And yes, this has been proven scientifically. Apparently we’re that narcissistic that we indeed choose dogs that resemble us. After all, what is more familiar than our own face?
And I think that going into a relationship is mostly like buying a dog - except partners don’t always prove to be as loyal as dogs. Very often, when I go see my grandma, I meet this old lady, walking her dog in the little park across the street, and they both have the same facial expression – a very bored, sort of sad look in their eyes – and black, watertight jackets. Just like pets resemble their owners, every time people are in a relationship they start looking like their pair. I even had some friends that actually wore colour-coordinated Abercrombie&Fitch outfits. That was a couple you couldn't miss! Lizzie, a friend of a friend, wouldn't go to any party if her boyfriend’s tie wouldn't match her dress. And I’m sure you guys would have at least one similar story to tell.

There’s so many times, however, when we actually do things we don’t like for the sake of our boyfriends or girlfriends. That’s how I went through the first season of One Tree Hill even though I hated it. I still pretended to like it.  They say opposites attract but the opposite aspect somehow gets lost after becoming a couple. I can probably count on the fingers of one hand the couples that have a HE and a HER besides a THEM. We do that unconsciously. We become ‘we’ persons voluntarily. I was talking to a friend a couple of days ago and asked her how she was doing. Her reply was: “We’re cooking dinner”. We who? Normally, if someone would refer to themselves as ‘we’ people would probably ask some questions (is she sane, for example). But I guess we just have to get used to live in a world where people come in pairs sometimes.
I don’t think this is either good or bad but rather funny. Is it that we lose ourselves while we are in a relationship? Do we adopt our lovers’ habits and ideas to conform to the ‘norm’? I have no idea and I think there’s no particular way to stop this nor should we necessarily want to stop this. It’s more or less a natural evolution to start doing things that the people we are next to every day do as well. The real problem, I think, comes up when a couple decides to get a dog. Who should the dog resemble, I wonder. Well, one thing I’m sure of – if I ever get a dog of my own I want it to have my hair colour and language skills. Fair enough, right?

Tell me your thoughts, I want to know everything!
Labels: blogger boyfriends christmas fashion lifestyle love